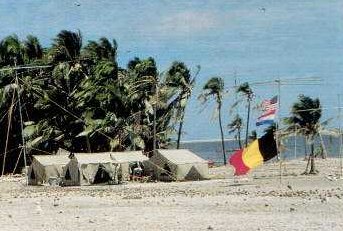 An island located in the Pacific about 700 miles southwest of Acapulco.

Clipperton is a circular coral atoll of 2 square miles, completely enclosing its lagoon. Temperatures are tropical and the vegetation includes scrub, wild tobacco, and some coconut groves. The only known structures on the island are the ruins of a 19th century lighthouse and a tuna fishing station. 115 species of fish have been identified in the vicinity of the island.

Other than the 700-mile boat voyage and the lack of a harbor, be sure to avoid crashing into the surrounding coral reefs.

The island is named after the English mutineer and pirate John Clipperton, who made it his hideout in 1705. The French claimed Clipperton in 1855, but Mexican forces invaded in 1897 and stationed troops there until 1917. In 1930, the island again came under French rule. It was claimed by Molossia in 1980.

Since then it's been nothing but quiet. Swim in the lagoon, scale the coconut trees, look for buried treasure left behind by old Captain Clipperton. Explore the tuna fishing station, search for signs of the garrisoned Mexican troops, check out the lighthouse, snorkel around the reefs, and take in a little fishing. Can an island get more romantic than this? In addition to the tropical breezes and the corsair connection, its alternative name is "Ile de la Passion." Whatever you do, don't worry about running into any teeming masses. Clipperton is so isolated that it has eluded even John Clouse, considered the "No. 1 World traveler" by the Guinness Book of World Records... Clipperton is one of only three spots in the world this septuagenarian divorce lawyer from Evansville, Indiana, hasn't visited.

Clipperton Island is a barren, ring-shaped coral atoll located 1630 miles south-southeast of San Diego, California, and 1600 miles west of Nicaragua. The only atoll in the East Pacific, it completely surrounds its stagnant fresh-water lagoon and serves as home for thousands of sea birds and millions of land crabs. Clipperton's total area is about 7 square kilometers. Most of the island is no higher than 6 feet, except for Clipperton Rock, a volcanic rock formation which reaches a peak height of 69 feet.

Clipperton Island was originally discovered by Ferdinand Magellan in 1521, but was later named after John Clipperton, an English pirate who led a mutiny against William Dampier in 1704. It has been rumored that Clipperton hid some treasures on the atoll.

In 1708, two French ships 'Princess' and 'Découverte' reached the island and named it 'Ile de la Passion', and annexed it for France. The first scientific expedition took place in 1725 by Frenchman M.Bocage, who lived on the island for several months.

Over one hundred years later, Clipperton was found again by an American guano mining company. The treaty of Guano was made in 1856, and the United States had rights for guano mining on Clipperton. In 1857, the French declared (under heavy American) protest that Clipperton was a part of Tahiti. But after several years of no permanent settlement on the island, Mexico occupied the island in 1897 and established a military outpost on the island.

In 1906, the British 'Pacific Island Company' annexed the island, and built a settlement together with the Mexican government in order to mine guano. In that year, a lighthouse was also erected. In 1914, about 100 people, mixed men and women, lived on the island. Every two months, a ship from Acapulco went to the island to bring food. However, with the start of the Mexican civil war, the atoll was no longer reachable by ship, and the people on the island were on their own.

By 1915, most of the inhabitants had died, and the last settlers wanted to leave on the American war ship 'Lexington' which had reached the atoll in late 1915. However, the Mexican military Governor declared that evacuation was not necessary. By 1917, most of the men had died and only the lighthouse keeper was living along with 15 women on the island. In July 1917, three women were the only ones alive and were picked up by the American ship 'Yorktown'.

Ownership of Clipperton was then disputed between France and Mexico. France approached the Vatican for a decision on who owned the lonely atoll, far offshore. In 1930, the Vatican gave the rights to the King of Italy, Victor Emanuel II, who declared one year later that Clipperton was a part of France. When Clipperton was finally declared as a French possession, the lighthouse was rebuilt and the French settled a military outpost on the island. The outpost only remained for there seven years and then the French abandoned it.

In the late 1930's, Clipperton was visited twice by President Franklin D. Roosevelt who wanted it to become an American possession for use as a trans-pacific air base, and in 1944 he ordered the navy to occupy the island in one of the most secret US operations of WW II. After the war it was abandoned, and has since only been visited by the French Navy and an occasional scientific or amateur radio expedition.

Click on pictures below to view a larger image. 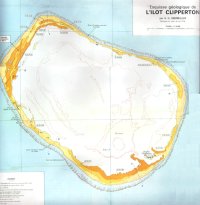 Return to the Republic of Molossia webpage.