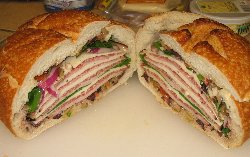 The New Orleans Muffaletta is a sandwich that was created in 1906 at the Central Grocery in the French Quarter. The Central Grocery is a very old little Italian grocery store that is a must visit for anyone going to New Orleans. Look for it on Decatur, just as you are leaving the Jackson Square area on the way to the French Market. The Progress Grocery, a similar store right nearby, makes a mean Muffaletta too.

Ingredients: (meat and cheese should be thinly sliced or shredded)

Slice the large or small loaves like a hamburger bun (Focaccia doesn't need to be sliced, because it's usually thin). Lightly toast. Add alternating layers of meat, cheese and olive salad. Pop in the oven to melt cheese and then put the whole thing together to enjoy.

Return to the Molossian Kitchen.